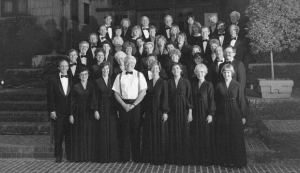 Pasadena Pro Musica was founded in 1964 by Edward Low, the Music Director of Neighborhood Unitarian Universalist Church.  From the beginning, we have been committed to providing a place for musicians and audiences who appreciate great choral music that is not frequently performed. Originally called Neighborhood Chorus and Orchestra, the group was a pioneer of early music on the West Coast in the 1960s and 70s, performing long-neglected Renaissance masterpieces by Isaac, Josquin, and others.  Ed led Pro Musica until his retirement in 1999.

Stephen Grimm was our Artistic Director from 1999 until his farewell in 2018.  Under his creative leadership Pro Musica expanded our repertoire while also continuing our classical traditions.  We performed staged productions of Henry Purcell’s Dido and Aeneas and Holst’s Hymns from the Rig Veda. In Alive and Well and Living in LA we featured the works of Los Angeles-area composers.   Two concerts showcased traditional American music, from Revolutionary War tunes to Cole Porter.  Mozart’s La clemenza di Tito marked the grand finale of Stephen’s tenure with Pro Musica.

Current Artistic Director Scott Lehmkuhl is taking Pasadena Pro Musica in new and exciting directions while still honoring our musical origins.  Under Scott’s direction we have sung Haydn’s The Creation with commentary by a NASA scientist and have dedicated a performance to traditions of remembrance from many different cultures.

Pasadena Pro Musica has performed many contemporary pieces and a number of world premieres, including works by Los Angeles-based composers Thomas Yeakle (for many years our composer-in-residence), Morten Lauridsen, William Kraft, John La Montaine, Elaine Bearer, Shawn Kirchner, Eric Whitacre, Richard Bing, Frank Ticheli and Rayner Brown. We enjoyed deep artistic relationships with two musical luminaries: composer Daniel Pinkham, who frequently guest-conducted his own works, and Jester Hairston, the celebrated songwriter, arranger, conductor, actor and leading expert on spirituals, and who regularly led the chorus in his own gospel arrangements from 1966 to 1992.

Pasadena Pro Musica has also collaborated with artists from the world of theater and opera, presenting staged performances of Menotti’s Amahl and the Night Visitors with mezzo-soprano Suzanna Guzman, Jean Anouilh’s The Lark with music by Leonard Bernstein, and the wonderfully strange musical Boojum!, based on the life and works of Lewis Carroll.

Pasadena Pro Musica was part of Fulcrum Arts’ AxS Festivals “Fire and Water” in 2011 and “Curiosity” in 2014. The chorus has also appeared with Southwest Chamber Music, the Pasadena Symphony, and the Los Angeles Philharmonic in Mahler’s Symphony No. 8 at the Shrine Auditorium. We had the unique honor to be selected to perform in the multi-media Star Wars: In Concert at the Hollywood Bowl in 2012.

Ed Low came to Pasadena from Boston in 1964 to be Music Director at Neighborhood Unitarian Universalist Church. He was formerly head of the music department at Pine Manor College in Massachusetts and a faculty member in the choral conducting department of Berkshire Music Center at Tanglewood.  He also served as assistant conductor of the New England Conservatory Chorus.

Low was one of Southern California’s leading champions of contemporary music, producing many premiere performances of works by American composers.  But whether performing rediscoveries of ancient music or interpreting contemporary scores, it was Low who set the tone and spirit for Pasadena Pro Musica’s continued success.

Ed passed away in 2014 at the age of 84, just prior to Pasadena Pro Musica’s 50th Anniversary Celebration.  The artistic and financial legacy he left for the organization will forever be appreciated.

Your ticket for the: About